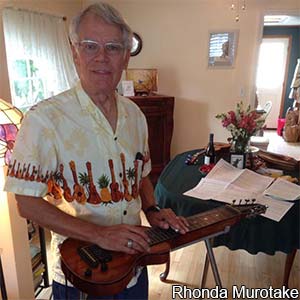 Dan Villani bought his first guitar for five dollars, from a high school buddy in 1961. His parents weren't sure it was a smart thing for him to spend his allowance on, but they were generally supportive. They were quite generous with "Well, uh, that sounds nice, son. Uh, if my Mitch Miller record's interfering with your practice, it's OK for you to shut the door to your room. Really, it's OK." And of course they sometimes were even more supportive, providing the Magic Words that would get any 1960's teenager to renew his commitment to constant practice: "WOULD YOU STOP THAT RACKET FOR A WHILE?!?!?"

vIt was, he insists, the best five dollars he ever spent. Some five years after buying the guitar, he discovered that it had one of the biggest surprise bonus features of all time: while sitting in a room full of mostly strangers, next to an exceptionally pretty wahine, he started playing "Norwegian Wood." The beautiful wahine turned out to be a Beatles fan. And the rest, of course is history.

After about 45 years of playing surf, Beatles, surf, rock, surf, folk, surf, blues, surf, Gospel, and a little surf, he discovered lap steel guitar, and began producing music that moved a relative to suggest that he record it, in case some movie studio needed background music for a drunk cowboy staggering down a street. Fortunately, soon after that, Dan discovered Alan Akaka, and his steel guitar playing began to sound less "staggering cowboy" and a little more "swaying palm trees." Around the same time, his lovely wife Angie (the aforementioned Beatles fan) discovered slack key guitar, and the two of them are now the core of 'Ohana Villani and Friends. The group has grown out of a larger group of AMC campers that has been meeting casually for about two years in Long Beach, California. They have coined a hapa haole term, "Kanikapotluck" to describe their get-togethers, which feature nahenahe music and ono kine grinds. They will bring the music with them, but they had to leave the grinds back on the mainland. Only so much room in the overhead baggage bins, yeah?