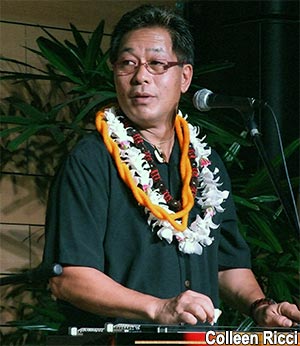 Alan Akaka is from a family whose roots are deep in Hawaiian music. His father Senator Daniel K. Akaka, former director of the famous Kawaiaha'o Church Choir, played an important role in Alan's music beginnings and encouraged him through his development. His family gatherings, which included lots of music making, and music education at Kamehameha Schools and the University of Hawai'i further expanded his base in music. Alan established and directed the Kamehameha Middle Schools' Na 'Opio Singers and Hawaiian Ensemble. He was director of the Performing Arts Academy at Kamehameha for 16 years. In 2009 he established Ke Kula Mele Hawaii, school of Hawaiian music.

For over twenty years Alan was leader of "The Islanders" featured at the Halekulani's House Without A Key and presently performs at the Waikiki Beach Marriott Resort. He travels throughout the world as an artist and conducts Hawaiian music and steel guitar workshops. In 2012, Alan was inducted in the Hawaiian Music Hall of Fame. In 2014, he was invited as a guest soloist at the International Steel Guitar Convention in St. Louis. He was presented with an award at the 2015 India International Guitar Festival in Kolkata, India.