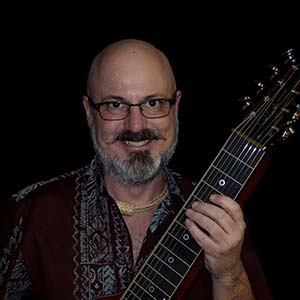 Mark was born on O'ahu to a family of mixed ancestry which includes (among many) Portuguese, Hawaiian, Syrian, French and Chinese - a true reflection of the melting pot that is Hawai'i! He has fond memories of being a child and playing 'ukulele with his two brothers at family gatherings. This was mostly folk music—a love instilled into him by his step-mother. During his school years, he studied flute, concentrating on symphonic music. This continued into his mid twenties, where he had the pleasure to play in bands and symphonies throughout Southern California and Mexico.

For a couple of decades after that, music took a back seat to theatre, where Mark both acted and directed at various semi-professional venues in San Diego, his new home. A few years ago, feeling the urge to reconnect to the land of his birth and upbringing, he purchased an 'ukulele and started to relive the fun he had playing one as a child. This led to his attending multiple years at Aloha Music Camp where he met Alan Akaka.

On a family visit to Oahu, he was enjoying the Keawe 'Ohana show and started talking to Alan about the lap steel. While Mark had always loved the sound it makes, he had never actually played one. Later in the week, he could be found at Ke Kula Mele Hawai'i and the first notes he made told him this would be an instrument that would bring joy to his life.

While Hawaiian music was not prominent in the household, it did hold a very important place in the family's history. Mark's great-great-grandmother is the composer from Kaua'i, Annie Haweakahai Kaulukou who wrote the beautiful hula "Lihu'e". Her daughter, Hannah Maude Kuleikini Atwood was a singer and 'ukulele player for the Kodak Hula Show and the Royal Hawaiian Girls Chorus. Mark feels honored to have the opportunity to play music on the island of his kupuna.