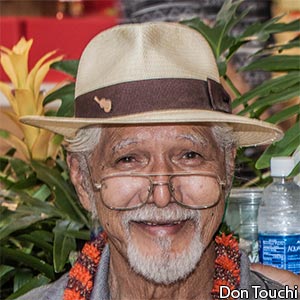 Eddie Palama was born on August 5, 1946 in Honolulu, HI. He is a self taught steel guitarist and found his first steel guitar in a public trash bin late in life. He cleaned it off and added strings to it. For about a year of extensive practicing day and night, Eddie taught himself to play the steel guitar. Eddie joined the Musicians Union and became a professional steel guitar player the following year.

Eddie has played the steel guitar with some of Hawai'i's greatest Hawaiian music legends such as Gabby Pahinui, Atta Isaacs, Sonny Chillingworth, Genoa Keawe, Eddie Kamai and Danny Kaleikini. Eddie also recorded for many of the top recording artists in Hawaii such as the Peter Moon Band, Olomana, Teresa Bright, Kehi Brown, Keith and Carmen Hargen, Sandwich Isle Band, Hawaii Loa and Pahinui Brothers. At times, Eddie can be seen performing at The Hawaiian Village, The Halekulani Hotel and other venues in Honolulu. Currently, Eddie is playing with a band called the Hawaii Loa.