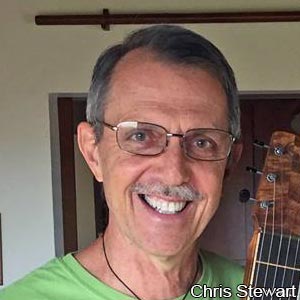 Robert "Konabob" Stoffer fell in love with the Hawaiian steel guitar in 1998, at the age of 45, three years after moving to the Big Island of Hawaii. "I woke up very early one morning and recalled that I had been playing a steel guitar in my dreams. My mother-in-law, living in Colorado, had a 1953 Supro electric steel stored away (it had been my father-in-law's), and offered to bring it to me on an upcoming visit. I struggled to learn how to play it, and might have given up, had it not been for a chance meeting with Ken Emerson, a world class musician. Though he told me at the outset that he was not a teacher, he inspired me to continue my efforts, and also to stick to the Taro Patch (D-G-D-G-B-D) tuning until I had mastered it."

Emerson also introduced Konabob to the acoustic Hawaiian steel guitar, father of the dobro and electric lap steel, and grandfather of the pedal steel guitar used in country music. This style of guitar (the "Weissenborn") was developed in the early 1900's by inventor, Hermann Weissenborn, and it is making a small comeback due in part to the efforts of guitarist Bob Brozman. It has a sweet acoustic sound, which made it very popular in the early 1900's.

In February, 2008, Konabob happened to get his hands on a Hermos electric lapsteel for half an hour. It was well designed with very high string tension, and Konabob realized that acoustic guitars can not withstand the tension that is possible with a solid body guitar. Konabob then started to design and make a new guitar, the same size as a baritone 'ukulele sized lap steel, but with 2 extra inches of string (22" scale) and built to withstand the tension of 29 lb. per string. This gives the steel exceptional sustains, and a Lindy Fralin split single coil pickup produces a wonderful tone with no noise and covers the 2.25" string spread. The body is koa with white koa sapwood accents and a mango fretboard. According to Konabob, this guitar changed his life.

Konabob is an accomplished musician, entertainer and instructor and has participated in George Kahumoku's "Hawaiian Lifestyle Camp" and Keola Beamer's &quotAloha Music Camp." He can be seen performing with Eke Kekauoha at a wide varitey of venues: the Aston Royal Sea Cliff, The Elks Club, Island Lava Java, and at private functions.